During my two weeks in Adelaide I took an overnight trip to Kangaroo Island. The cherry on top of a fantastic fortnight. Kangaroo Island is a perfect natural jewel and in my book as much of a must see as other more famous places in Australia. Each new spot more special than the previous one, two days filled with awe and wonderment. I imagine this is what David Attenborough feels on a daily basis and I was privileged to have the experience.

We all know the issues surrounding a lot of the world’s bee population. Here bees are thriving. Originally there were no bees here and between 1881 and 1885 bees from Liguria in Italy were imported to the island. In 1885 the South Australian Government declared the island a bee sanctuary and imports ceased. Crucially, the island is too far from the mainland for bees from either to travel to the other, so have remained untouched by cross breeding and any problems other bee populations are suffering today. It is believed that the Kangaroo Island are the only pure strained Ligurian bees left in the world. A honey tasting session of bottlebrush, sweet gum and my favourite, spring mix, revealed how different in colour or flavour honey from different flowers is.

At the eucalyptus oil distillery it was interesting to learn about the production but the visit was somewhat clouded by the very hard sell of their products and the bad attitude of the owner. You can’t win them all…

Seal Bay was a very joyful experience and a true David Attenborough moment. It is the home to the Australian sea-lion and the third largest breeding colony in Australia. I walked onto the most beautiful white sandy beach, the bluest ocean water and a cloudless sky and there they were. Sea-lions of all sizes sleeping on the sand, a couple of males testing each other over territory but best of all, a little pup whose mother was out to sea and kept moving around the beach in his frantic search for her. For a while it was so close that I could not stop grinning from ear to ear. It was precious. 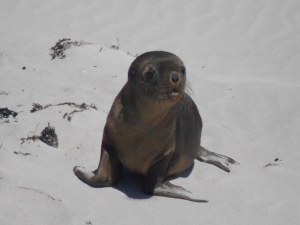 For an overnight trip I really packed it in and went to Flinders Chase National Park, one of Australia’s largest and earliest conservation parks, saw the interesting Australian Birds of Prey presentation, the riotous pelican feeding with the seagulls trying to get some of the loot and the appropriately named Remarkable Rocks which made me feel as though I was in a land of giants, huge granite boulders, shaped by time and weather sitting on a granite dome over the ocean.

With the Cape du Coedic Lighthouse behind me I slowly descended to Admiral’s Arch. On the first viewing point there were lots of people just staring at the rocks, it seemed slightly odd they should be so taken with a bunch of rocks. After a while, the rocks started to move…I could not keep count of how many New Zealand fur seals were on the rocks, perfectly camouflaged. As I continued my descent I saw them jumping on the water, swimming and playing. It was yet again one of those moments where I could not stop smiling. Admirals Arch is evidence that sometimes the elements can create something of outstanding beauty.

There are some koalas and kangaroos at the Pardana Wildlife Park. But for me, the trip would not be complete until I saw koalas in the wild. The visit to Hanson Bay Wildlife Sanctuary seemed doomed as there were only two koalas really high up in a tree and they were not that easy to see. Our group disbanded and I decided to go off by myself, I walked for some time until I heard something drop to the ground from a tree whose branches encircled the entire tree so I felt I was almost climbing into the tree. And on a low branch, there he was, my koala. The one I had waited to see. As though he knew how special this was for me, he started to move around the branch…I stood there alone with my koala for a good while. And as if that were not enough, as I joined my group we saw a mother and baby. I grinned a lot during those two days. 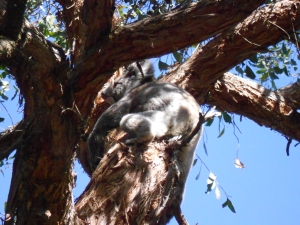 On the one evening there, after dinner, I joined a very small group in the hope of spotting the little penguin, the smallest penguin in the world. It was cold, windy and there was no sign of any penguins anywhere. It seems that whereas last year there were hundreds, this year there are only a few. Nobody knows why. Perhaps they have chosen to go elsewhere or perhaps they have ended up prey to sea-lions or feral cats which are a big problem in the island. Finally one waddled up the hill going to the nest where its mate, perfectly visible to us, was waiting. Sensing we were there, the little penguin stopped and hid and would not move for fear of showing us where its family was. It felt somewhat indulgent so I nudged a bit, time to go. After a while we did. I would like to think that the Kangaroo Island little penguins have just decided to go elsewhere and are happy enjoying a new home…