Having read it was a very special place, after two wonderful weeks in Tulum we headed to Isla Mujeres. I confess I was a little disappointed and it was not at all what I expected from all the information I found online.

Isla Mujeres is a small island about 35 minutes ferry ride from Cancun therefore a lot more touristy than Tulum. The main town is filled with restaurants and bars and bound to be very noisy in the high season. It is a very small town, about four streets each way crammed with souvenir shops and it doesn’t take very long to walk around it. There are other, limited options on the island that might have been nicer or quieter but were either full if they had a handful of rooms or had the issue of transportation to consider. It seems you cannot hire a proper car on the island, only golf carts which is inconvenient as you need to book way ahead or risk finding they have sold out. And if you are in one of the more distant places, would you want to drive a golf cart back to your hotel or resort once it is dark…not sure I would and in fact, many golf cat hire places were open only until by 5 pm. So all in all, we decided to stay in town and found a nice hotel on the outskirts which meant it was quiet but walking distance to everything.

The interesting thing about Isla Mujeres was nobody smiled, well none of the locals working there anyway. Hotel staff, waiters, everyone looked surly and we never, once managed to get a smile from anyone. Being such a touristy place, they must get fed up with tourists but still, a smile every now and then would have been nice, specially considering it was low season and half empty. The beaches, on the other hand, were out of this world but even in low season they were crowded and used to the paradise that was Tulum, we only went to the beach once and spent the rest of the time by the pool overlooking the ocean. 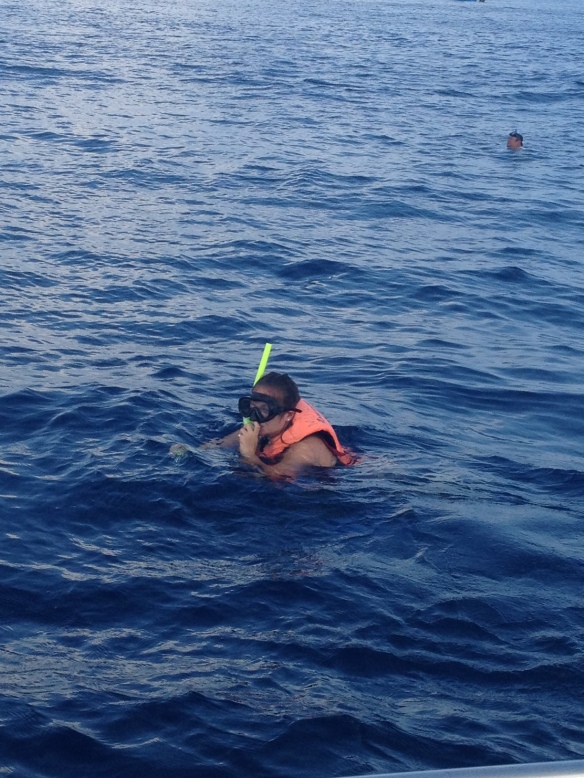 We spent over a week there for there was a purpose to the trip. Darling daughter turned 20 so my birthday present to her was going on a whale shark cruise where she swam along said sharks. They are enormous but vegetarian, therefore harmless. I did not go in the water. I blame Steven Spielberg. She, on the other hand, had a blast and announced it “the best birthday present ever”. What more could anyone ask for?